Tom Cooks up a Storm 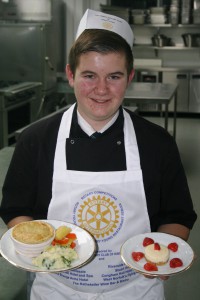 Tom was presented with his certificate by Trinity Rotary Club of King’s Lynn President Jim Milne and representative Bert Cook. He will now head to the district round of the competition at Suffolk One Sixth Form College, Ipswich, on 27 February 2016.

The Rotary Young Chef Competition is a well-established and successful competition organised and promoted by Rotary International in Great Britain and Ireland. It is a four-stage national competition to support and encourage development of cookery skills, open to all students in full time education between the ages of 11 and 17 on 31 August 2015.

The competition was judged by Les Philp, owner of Grants restaurant in Norfolk Street and Colin Rushmore who is now retired after spending many years running his own establishments in Norfolk. They both praised the work of the students and the commitment they have made to the competition in creating such quality dishes.