Monday 11th November 2019, Armistice Day, no less important for being 101 years since the armistice was signed as last year being the centenary year. Our students and staff once again showed our compassion, reflection, respect and an unwavering gratitude at the sacrifices made each and every day from our service men and women.
To read a full account of the service by Mr Modica please click on the link below:

Sunday 11th November 2018, 11:00am will be exactly 100 years since the horrors of the fighting in World War I came to an end. Friday 9th November 2018 saw our school come together in an incredibly poignant and powerful display of respect, reflection and remembrance. We are proud of our student community daily, for a whole range of things, but on this day, they showed the very best of themselves. As well as the students, the adults within our school community gave their reflections and respect too and enhanced the reason and meaning for our remembrance service truly bringing every element of St. Clement’s High School together.

To read a full account of the service by Mr Modica please click on the link below:

During March 2018 as part of the schools Supper Learning Day activities, 70 Students from St Clement's High School went on an a trip to the World War 1 Battelfields. The importance of this topic and the footsteps that the children will tread in whilst away can never be underestimated, least not this year, being the 100th anniversary since the end of the Great War when the armistice was signed at 11am on the 11th day of the 11th month 1918.

April 2017 will live in the memories of all of us who were part of an incredible, and important trip in to Nazi Germany and the Holocaust. Students from year 9 and 10 went on a trip to Berlin, Germany’s capital, and Krakow in Poland to visit Auschwitz, the Nazi Concentration camp responsible for the deaths of over 1.2million Jews, gypsies and homosexuals during World War 2, a massive part of the 6 million killed by Hitler’s Nazis.

14th October 2016 to many, was an ordinary day; we got up, came to school, had our lessons and went home safe in the knowledge that it was Friday and we could have a lie in tomorrow! However, 14th October 2016 wasn’t an ordinary day, it was an anniversary, and not just any anniversary; 14th October 2016 was the anniversary of ‘arguably’ the biggest turning point in the history of our island, of our culture, of our language and of our characters! 950 years ago today was the Battle of Hastings. You may be thinking why was that so important? It wasn’t anything that big, like Henry VIII’s creation of the English Church of England, or Elizabeth I’s defeat of the mighty Spanish Armada, or even as big as the chopping off of King Charles I’s head leading to people power in the short lived Republic of England (thankfully it was short lived in my opinion). It was bigger than all of those events for one significant reason, it was the end of the tribal Anglo Saxon England and the beginning of the hierarchical, monarchy driven, “modern” England. 14th October 1066 was the last time England was ever successfully and fully conquered by a foreign power. 1066 saw the Norman / French Duke, William of Normandy defeat the Anglo Saxon ruler Harold Godwinson on the south coast around Hastings, that we all know, but what was the real impact of this? 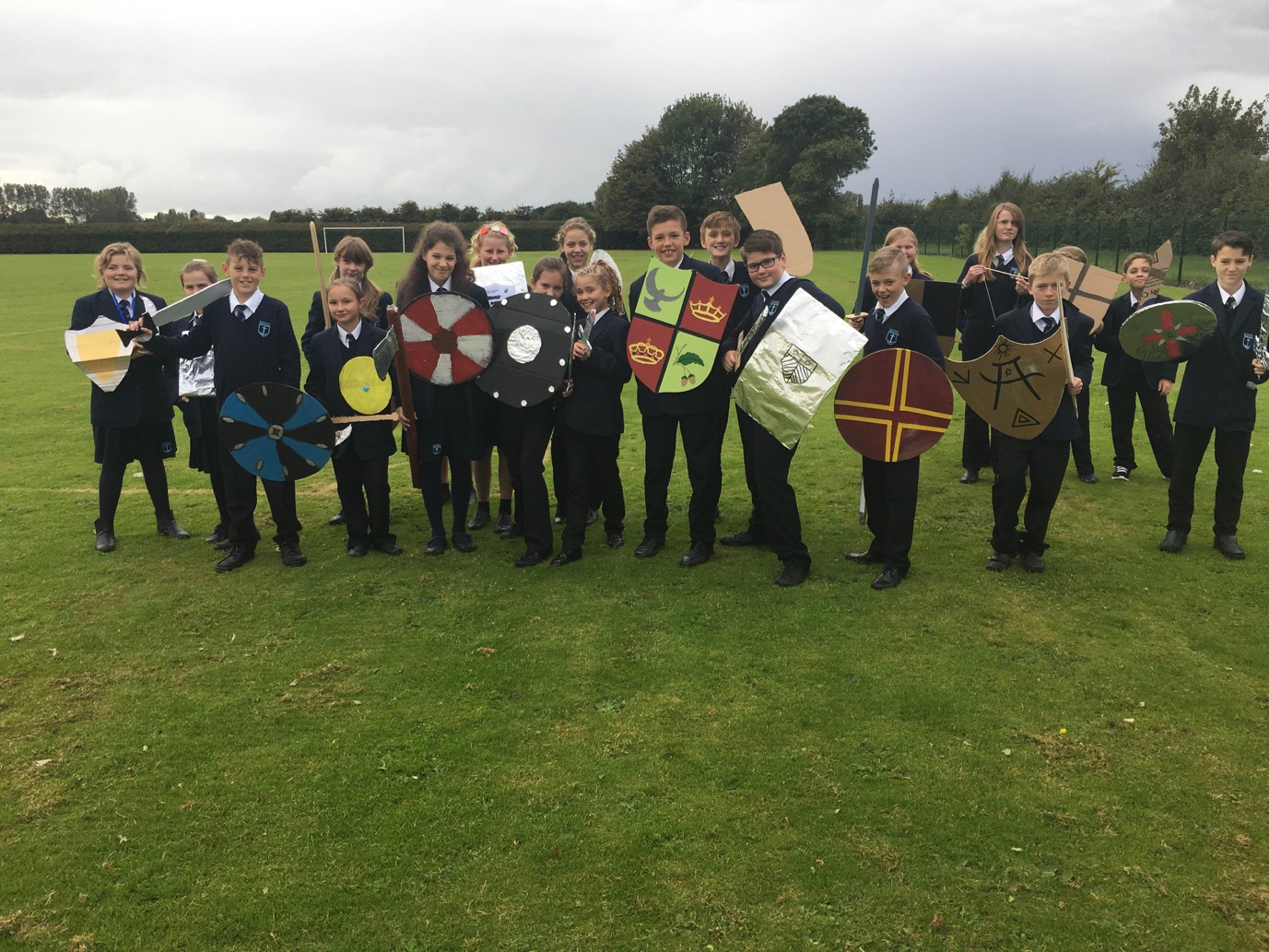 Some of our year 7’s re-enacting the Battle of Hastings. We’ve gone bigger and better this year to celebrate this special anniversary.

William brought ‘culture’ with him, he brought ‘society’ with him and he brought the rule of law with him, often through the shedding of blood. England was no longer part of an island split into territories and tribes left in the doldrums of a ‘survival existence’ following the departure of the Romans. King Arthur had been and gone (allegedly) and crucially England was now out of the ‘Dark Ages’. Many of the laws we have today can be traced right back to 1066, including punishment for crimes, theft, murder. The idea of justice (although primitive in our minds) was established in the early modern world post 1066. Trade was a key feature of this new Norman England both domestically and abroad. Many of the foods we eat today are here thanks to the influence of our Norman conqueror. Above all though, the biggest gift given to us by William was our language. You may not be aware of this little fact but many of our everyday words have their origins in the conquest of England in 1066… 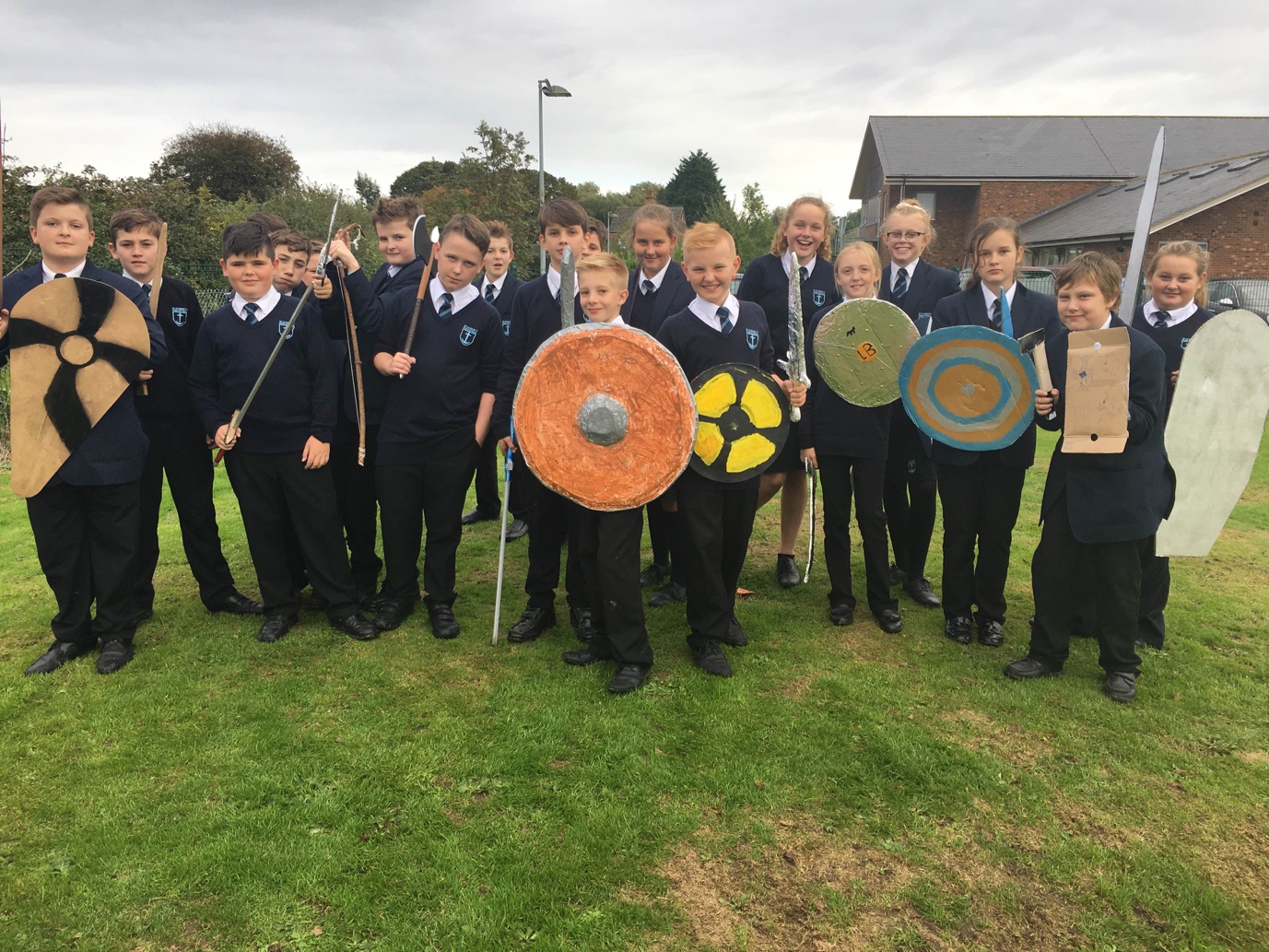 William’s culture also saw the setting up of a society, putting people in their places starting at the bottom (and the majority) as peasants, climbing up to the top of society (getting smaller) ending with the king. Everyone in this hierarchy knew their place and their roles in life and after an initial few years of protest and inevitable death as a punishment, Norman England was established. Our current monarch, Queen Elizabeth II does follow the lineage of monarchs all the way back to 1066 ensuring a royal family line lasting 950 years (although at various points in history, this line became very tenuous indeed). As Norman England became, well, England, our inevitable xenophobic attitudes of the early Norman conquest years seemed to forget the fact upon each next accession of king that they were all in fact from the Norman / French line. 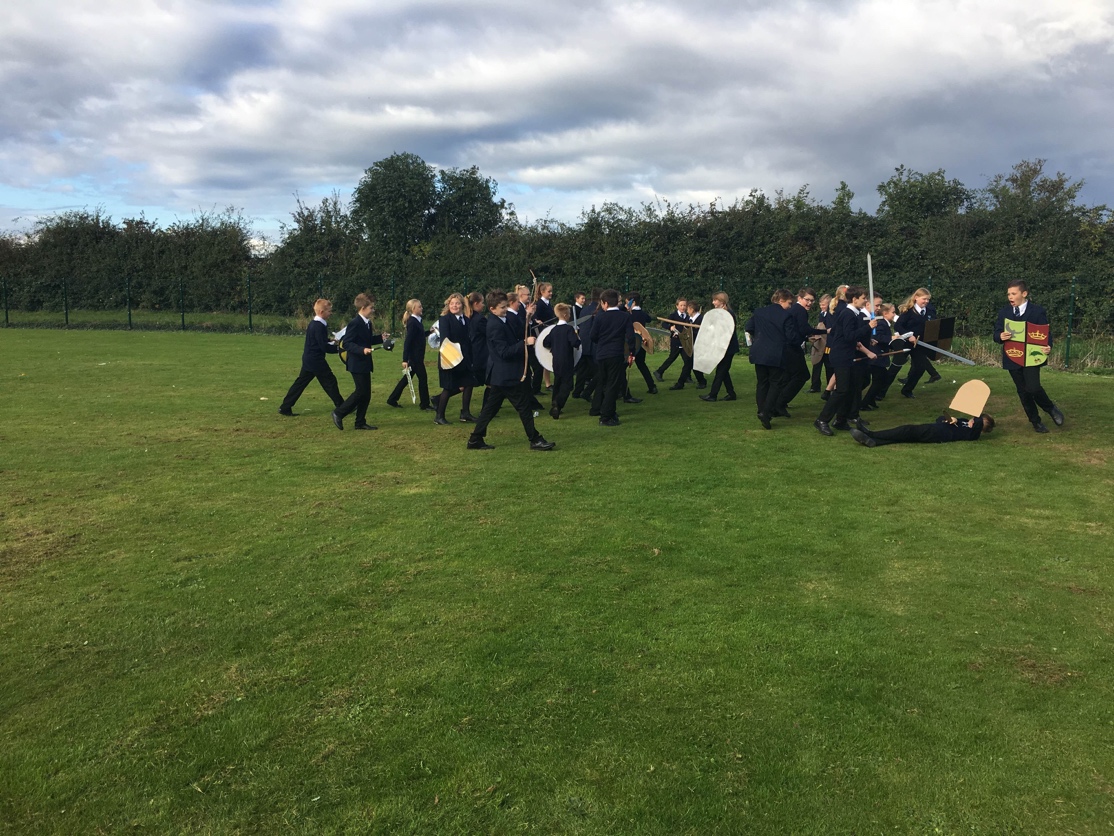 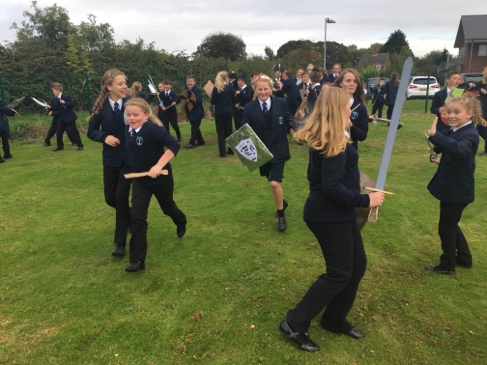 It’s clear that the Norman Conquest of 14th October 1066 changed our islands destiny and future and in many ways for the better. Our food, language, laws and self-determination, ironically, was spawned from this period. Without the conquest, perhaps we’d have remained a farming island content on getting by and dancing around giant stones with charms and chants, blaming the spirits and stars for things that went wrong, perhaps we’d never have had a society, or a government that told the people how to live, maybe we’d not have any consequences for crimes against each other and worst of all, we might never have monarchy. Think about our history without the castles of William, without Henry VIII, without the battles with Scotland and France, without the Tower of London, without Queen Victoria and her industrial revolution. I think in summary, we have to really appreciate, if not agree with my views, that 950 years ago, this battle on a hill in the south of England changed England forever! 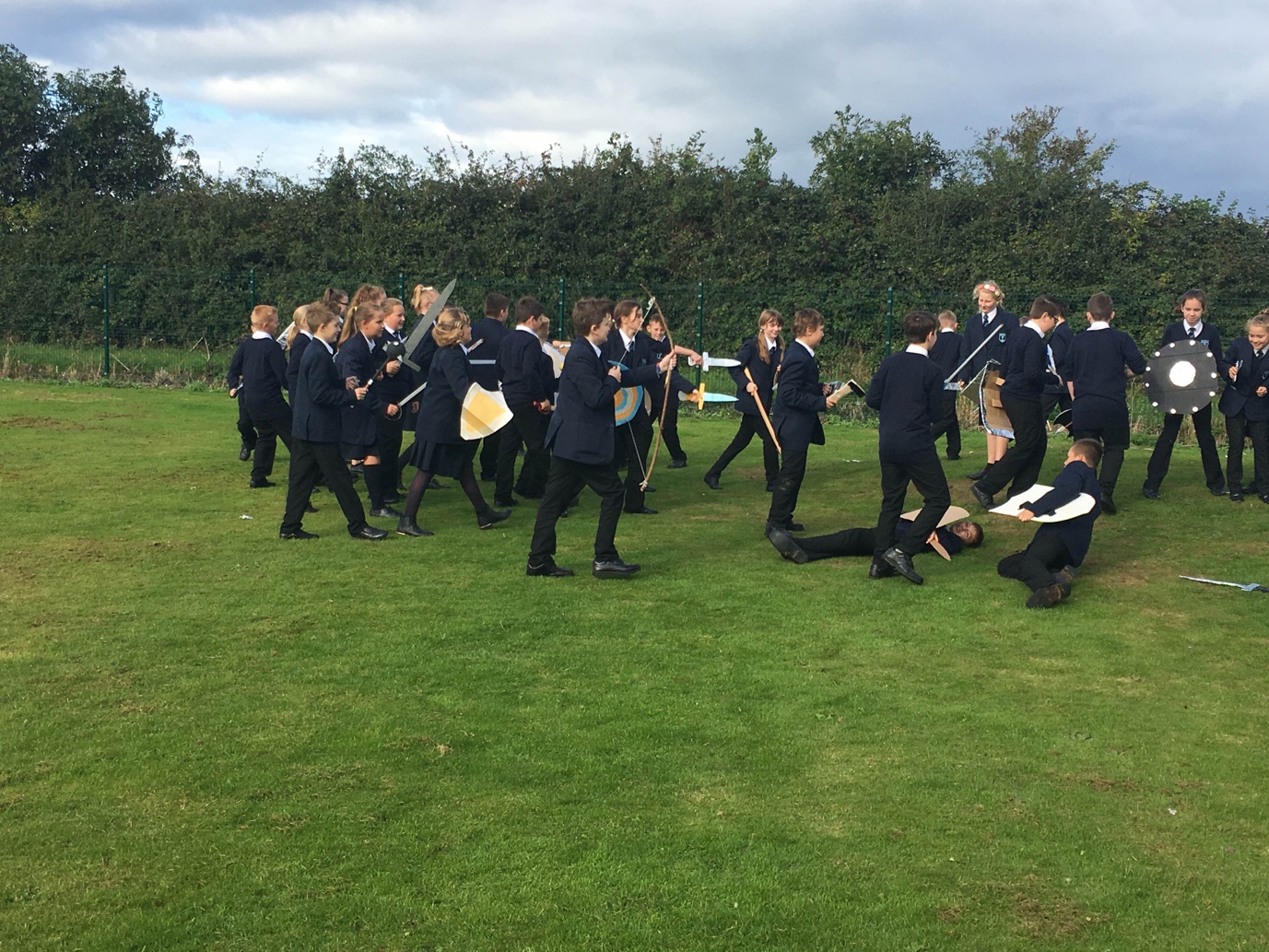 Thanks for reading and to see more of our 1066 celebrations visit www.stchistory.com and click the gallery for videos & pictures. Well done Year 7 for your efforts and enthusiasm!