Students from Springwood and St Clements High Schools drew creative inspiration from King’s Lynn’s past to name three new housing developments set to be built in the town. 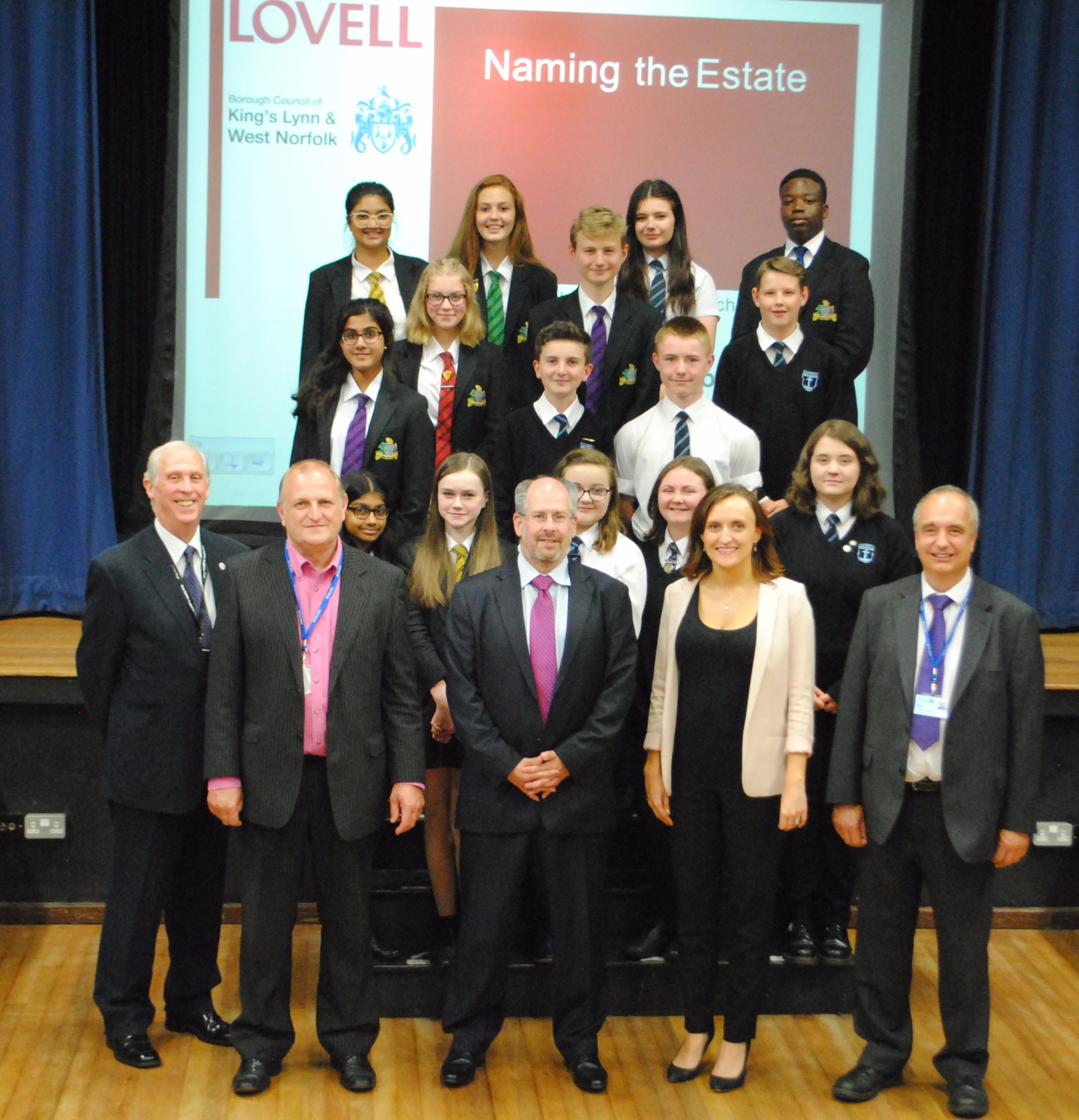 Housing developer Lovell and the Borough Council of King’s Lynn and West Norfolk asked Year Nine students at the two schools to come up with the names that will be used to market the new homes for Lynnsport. The three developments will create approximately 220 new open market sale and affordable homes.

Having carried out extensive research, including being given a tour of the development sites by Lovell, the student teams pitched their ideas to a panel of judges from Lovell, the council and the West Norfolk Academies Trust.

The winning names – Valentine Fields, Cowper Place and Dewside – were inspired by historical and cultural figures associated with the area as well as the local landscape. Valentine Fields (proposed by a Springwood High School team) commemorates John Sutherland Valentine, who was the chief engineer of the old King’s Lynn to Hunstanton railway line, which ran near the area where the new homes will be built. Cowper Place (proposed by a St Clement’s High School team) honours 18th century poet William Cowper who wrote about the draining of the river estuary which led to the development of King’s Lynn. Dewside (proposed by a Springwood High School team) relates to the area’s brooks, streams and waterways.

Lovell regional director Simon Medler says: “All the teams had done excellent research and gave thorough and considered presentations. We set the students the challenge to select names that would ensure the developments could be marketed successfully while promoting all the best aspects of the area for future residents. The names chosen more than meet the brief, thanks to a strong performance by all the teams involved.  Wherever we build, we look to involve and benefit local communities, so we’re delighted to have been able to engage with the Springwood and St Clements students so successfully through this project. We plan to continue working with the schools throughout the construction programme.” As a follow-up task, Lovell has asked the students to develop potential names for the roads which will make up the new developments and will be putting these forward for consideration by the council.

Cllr Alistair Beales, deputy leader of the Borough Council of King’s Lynn & West Norfolk and cabinet member for Regeneration, says: “I was delighted to see the huge effort the Springwood  and St Clements students had so obviously put into their proposed names. It takes courage to stand up in public and present your ideas.  Early nerves soon gave way to confident and inspiring presentations and all the teams had come up with names that evoke the history of King’s Lynn with a modern twist.  I am sure the experience will stand the students in good stead in the future and repay all the time and effort they put in – let’s also not forget the support of their teachers who should be very proud of what has been achieved.”

Springwood High School deputy head teacher David Hutton was delighted by the way students had engaged both in the research process and the presentation to the judging panel: “Both Lovell and the borough council have committed to this venture, so working with them has been a fruitful experience and hopefully will lead to other projects where the worlds of business and education benefit from a collaborative approach.”

Lovell is set to build up to 600 homes in the King’s Lynn area over the next five years through a development management agreement with the Borough Council of King’s Lynn and West Norfolk. Work is set to start next month (August) on the first homes to be built, at Marsh Lane, King’s Lynn, with Lovell beginning construction of 130 new homes.

The developments which have been named Valentine Fields, Cowper Place and Dewside by the King’s Lynn students will be built during later stages of the construction programme.